A few years ago I made the pilgrimage to Pontedera, Italy (map), the birthplace of the iconic Vespa motor scooter. My wife thought the “old scooter museum” was just a little side trip from Florence to keep me amused, but little did she know our entire two-week and three-country vacation was centered around the Museo Piaggio. We surprisingly both agreed it was one of our favorite parts of the trip. 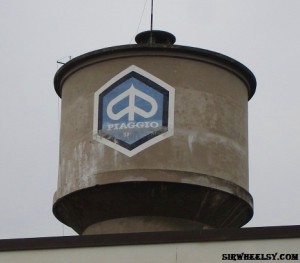 Piaggio & C.SpA is the parent company of the Vespa brand and has been an industrial giant since the late 1800′s.  The company manufactured railway cars and   airplanes prior to World War II, but was completely destroyed by Allied bombing. Enrico Piaggio shifted focus to motor scooter production during the post-war reconstruction. He hired  aeronautical engineer Corradino D’Ascanio to design an easy-to-use scooter to help get affordable transportation to the masses. With it’s bulging rear section to house the motor, skinny floorboard “thorax” and a large leg shield to protect the rider, the little motor scooter came into being. Mr. Piaggio proclaimed “It looks like a Wasp” (Vespa in Italian) and the icon was born. 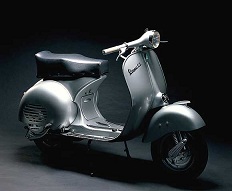 The company  is still the 4th largest producer of Scooters and Motorcycles to this day. The Vespa is  the flagship marque of all Piaggio’s brands, and the designs of the Modern Vespas are reminiscent of the many classic models.

I’ve been a motor scooter collector for nine years so I’ve always wanted to visit the Piaggio Museum. Seriously, this little industrial town in Italy is hallowed ground to us scooter junkies. Every antique Vespa I’ve owned (way too many to list) was born at  the sprawling factory in the Italian region of Tuscany. 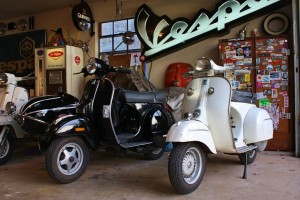 Getting to Pontedera, halfway between Florence and Pisa, was an easy train ride through the beautiful countryside. As soon as we stepped off the train at the little station we were staring right at the Piaggio factory. 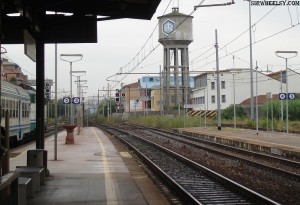 The Piaggio Museum opened in 2000 in one of the factory’s old warehouse buildings. It is now home to original airplanes, iconic advertising, Gilera motorcycles, and of course, Vespa scooters. 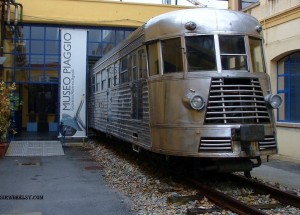 The entrance with a Piaggio train car. 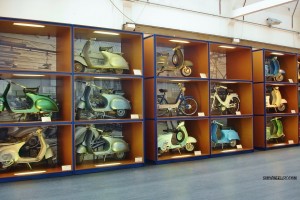 The Museum has a great collection of prototypes and some of the rarest Vespa motor scooters. 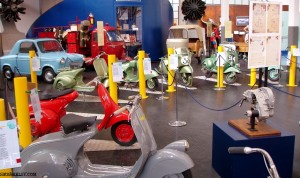 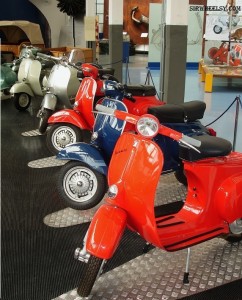 A 1950's French Airborne Vespa 150. These carried an M20 cannon and were actually used in the Algerian War. This was Martha's favorite. 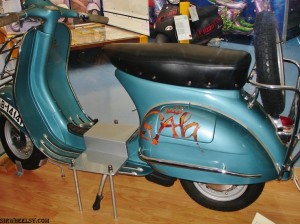 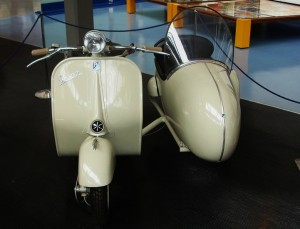 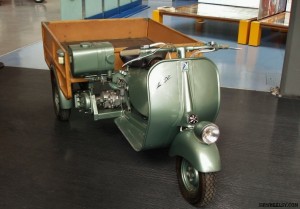 The Vespa Ape had many different commercial applications. There are a few in the States at reasonable prices, no matter what those two Picker guys say.

Even with all the cool stuff inside the museum, just walking around the factory (as much as I could) was exciting. Apparently they don’t have ground floor windows to keep Vespa collectors from taking pictures of the assembly lines and scooters being made. This was a truly amazing experience and I would recommend the Museum to anyone who is a scooter junkie or not. 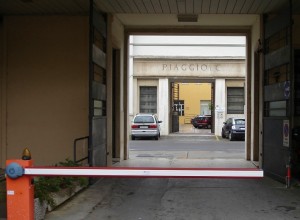 Thanks for taking the time to read about my adventure. Ciao.