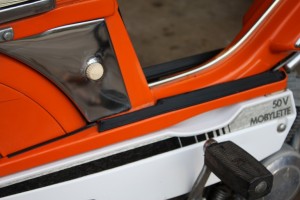 Well, I never thought I’d say I own a moped. Sure, people call my antique Lambretta and Vespa motor scooters mopeds all the time, but I’m talking about the real deal. Actual pedals and a motor mounted to what originally was a bicycle frame. Hence moped, meaning motor and pedals.

I know all the moped jokes too, but I can’t pass up anything with a motor and orange paint.  This little French gem had been tucked away in a Lake Highlands, Dallas garage for years.  I knew the paint was going to be perfect once I scrubbed off the 30 years of garage dirt.  I was thrilled it cleaned up as well as it did with four hours of detailing. Even more pleased when it fired up, ok putted to life, with some fresh gas.  It’s an excellent original condition Motobecane 50V Mobylette, built in 1977. 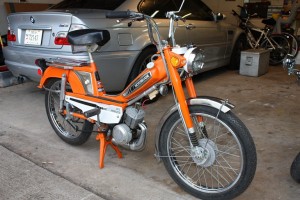 Motobecane used to dominate the French motorcycle and bicycle industry back in it’s day. Fourteen million Mobylettes of some model were made from 1948 to 1985. Sales decreased for decades as cars were more accessible to Europeans and the company filed for bankruptcy in 1981. Yamaha purchased the company and formed it into MBK in 1984. MBKis still selling re-badged Yamaha scooters (not mopeds) today. 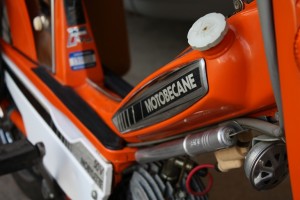 It even has the original tire pump and tool kit.

Everyone  I’ve spoken too in the last couple of days has a childhood story of building sweet ramps for their mopeds. 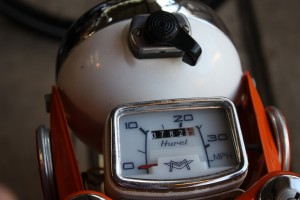 782 slow miles were covered by the original owners as they cruised around California. 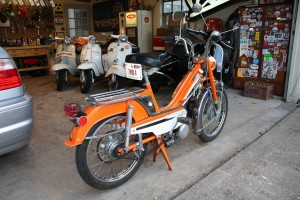 There was even a Ducati moped cruising the Tour d’Elegance and sitting pretty on the 18th hole at Pebble Beach last year:

If you have an itch for an old Italian, French, or Austrian moped, give Lester a call at Austin Mopeds or call Kyle at Kyles Scooter Shop in Dallas.